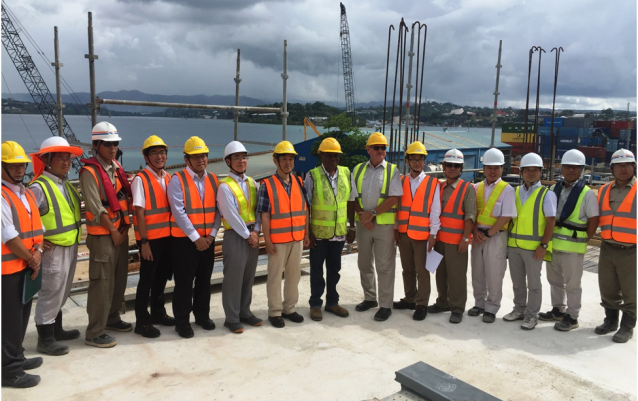 PORT VILA: Japan International Corporation Agency (JICA) President Dr. Shinichi Kitoaka was in the country this week in his first ever tour of three Pacific island countries including PNG and Solomon Islands, since taking up office in October 2015.

He was accompanied by Chief Secretary from the Office of the President, Mr Takumi Ueshima, Pacific and Southeast Asia Division 6 Director, Mr Satoshi Wakasugi, as well as Chief Representative of JICA Fiji Office, Mr. Hiroyuki Sawada.

Dr. Kitoaka was greatly delighted by the progress of the construction of the Lapetasi Multi-Purpose wharf which has achieved 42% completion status, and is on schedule for completion by October 2017. He was also glad to see a good model of Japanese assistance, which is creating job opportunities to Ni-Vanuatu, while at the same time transfer the important trade skills through work experience under the project. About 200 Ni-Vanuatu work for the project, along with 25 foreigners, including 5 Japanese.

Dr. Kitaoka praised Vanuatu as ‘a beautiful country’, and re-confirmed the importance of environment, infrastructure, and disaster risk reduction to support the country’s tourism industry. It is believed Lapetasi International Multi-purpose Wharf will contribute significantly to the growth of the economy once completed.

He was accompanied by Vanuatu Project Management Unity (VPMU) Program Director Mr Johnson Wabaiat, on a site visit to Lapetasi where he was briefed on the construction works progress.

On behalf of the Vanuatu government, Mr Wabaiat expressed the government’s gratitude for the approval of the second loan towards the project which enables the Vt10 billion worth of infrastructure to be completed successfully.