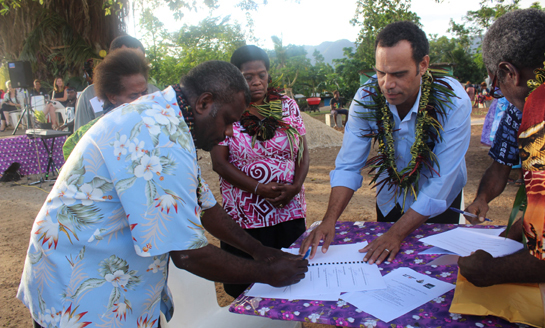 Port Vila, 30th June, 2017 – A new community-based infrastructure project was launched at Ohlen Nabanga on 30th June by a delegation including the Minister for Lands and Natural Resources, Ralph Regenvanu, the Australian High Commissioner, Her Excellency Jenny Da Rin, the Deputy Lady Mayor of Port Vila Ms Leimara Malachi, as well as Nancy Wells from the Asian Development Bank.

Bidding for South Paray Domestic wharf is set to kick off next month, with construction expected to begin in the third quarter of this year 2021. The construction of the new South Paray Domestic Shipping Terminal, as part of the Vanuatu Inter-island Shipping Support Project (VISSP), was brought to a halt in 2018 when independent investigations, instigated by the Government and its development partners, identified design concerns and the requirement for more detailed site investigations. Click here for more

Designs for Lenakel and Litzlitz wharves have been finalized while bid submissions from contractors for the repair works closed on 4th of March 2021.

Following evaluation of the bids and award of this contract, construction is anticipated to commence in late April 2021.

This work is being included in Stage One of the next phase of Vanuatu Inter-Island Shipping Support Project (VISSP) which includes South Paray recommencement.

This stage of works will be completed by 2023 if VPMU and partners can overcome logistical and financial challenges presented by COVID-19.

In addition, site investigations for Simonsen and Port Sandwich have been completed and design works are well underway. Civil works for these two wharf infrastructures are scheduled to come on in Stage Two of VISSP.

Meanwhile, planning for new facilities at four other locations is also under consideration.

If there is any particular VPMU project that suffered most from the global pandemic it would have to be the Vanuatu Energy Access Project (VEAP), funded by the Asian Development Bank (ADB), Strategic Climate Fund and the Vanuatu Government, at a total cost of well over Vt1 billion.

This project was supposed to have commenced construction in mid-2020 but plans were derailed as a result of international border restrictions, brought about by the COVID-19 global pandemic. It meant contractors have had to stay put in New Zealand after signing the contract in early 2020.

This is a project that is bound to greatly benefit the people of Malekula by providing affordable electrical hydro power to households and helping people within the North-West Malekula in and around Brenwe and from Unmet to Leviamp; even down to Laravet in North-West Malekula, to improve their livelihoods.

A civil works contract was signed just as the curtain on the last legislature was drawing to a close in January 2020, and Vanuatu was gearing towards the March 19th 2020 elections. The Government put pen to paper on 21st January 2020 when Minister Bruno Leingkone, who was (and is) also responsible for energy matters signed the contract with MAP/Vortex representative and Project Manager, Mr. Mark Prater. Works were scheduled to start within the first quarter of 2020 after that signing. This did not eventuate, as the country went into temporary travel restrictions on April 27th 2020.

Following temporary restrictions placed by the National Disaster Management Office (NDMO) a State of Emergency (SOE) was later declared for the whole country to ensure the country was kept free of the deadly disease. But then the Government raised some hopes that travel restrictions would be eased in September. VPMU took its cue from the assurance and proceeded to make preparations for the contractors to enter the country by November. This never came about as the State of Emergency (SOE) was extended further beyond September and into Christmas.

It has to be noted that by September, it still was not clear if VPMU contractors could come under any of the category of persons allowed to enter the country. Priority was being given by the Government to Vanuatu citizens and residents wanting to be repatriated from overseas.

Thanks to the Government, through Council of Ministers for recognising the need to balance the economic needs of the country to keep the oils of the economy running; while at the same time keeping vigilant as regards health and safety and COVID-19, a decision was made for the contractors to come under special category visas for project related travels.

Since then, negotiations with relevant authorities – not least the COVID-19 taskforce team and the department of immigration and the NDMO, necessary approvals were obtained for MAP/Vortex personnel to enter the country in November. In the end, it wasn’t to be. While it was right on the verge of the beginning of the country’s cyclone season, the contractors decided to arrange their arrival in March 2021, to allow time for cyclone season to at least be on the wane.

To state that the global pandemic was a major setback to VPMU projects, especially VEAP would be a gross understatement.  Like many other government departments and agencies, including businesses, VEAP stakeholders, especially the people of Malekula and the government have had to put up with almost 10 months of uncertainty and constant to-and-froing between VPMU and the contractors.

“We are just so grateful for the assistance VPMU has been offered by the Government through the Council of Ministers, which has resulted in the granting of key approvals to allow for the arrival of the first team from MAP/Vortex,” says Program Director, Anna Salwai Tavoasese.

Hall of Justice handed over to VPMU

The Government through the recently established National Project Coordination Committee (NPCC), co-chaired by the Minister for Finance and his colleague Minister for Public Utilities, has officially delegated the responsibility for implementation of the country’s new Hall of Justice (HoJ) project to the Vanuatu Project Management Unit (VPMU).

The decision was reached on February 5th 2021 at the committee’s inaugural meeting to try and expedite implementation of a project that has taken about 14 years to realize.

Since the burning down of the Court house in 2007, the seat of the Vanuatu judiciary has not settled, so to speak. They have had to shift courtrooms around a fair bit, from their current premises opposite the Sainte Jeanne d’Arc French school in Port Vila, to Dumbea, and even to The Mall – opposite the VNPF building in town. As such it has not been easy for the judiciary to administrate justice.

Arsonists had burnt the colonial era building to the ground on June 27th 2007. Since then various governments have tried to address the concerns of the judiciary without much success – largely due to the high costs involved and the government’s own budgetary constraints. It meant that the Government has had to look to its bilateral friends for assistance. And it had to be strategic. The judiciary – being the third arm of government regarded its independence as paramount. As such Governments have maintained that no single donor could fund the project.

It wasn’t until 2019 when Council of Ministers finally agreed on moving the project forward with support from two of its traditional donor partners - Australia and New Zealand.

The same Council of Ministers also approved two Government ministries as lead agencies with responsibility for delivery of the project. They were the Ministry of Justice and Community Services (MoJCS) and Infrastructure and Public Utilities (MIPU).

But more than a year has gone by without any further developments– forcing the National Project Coordinating Committee (NPCC) – recently established to try and fast-track well over 20 Government projects that seemed to have stalled, to reconsider the implementing arrangements.

The decision of NPCC effectively put an end to the previous implementation arrangement – handing the project over to VPMU to oversight and manage. A COM paper was needed to approve the new arrangements to allow VPMU to be the implementing agency.

The Ministry of Justice retains its role as lead implementation ministry in the project.

Since February, VPMU has initiated talks with partners and we’re hopeful the project can commence implementation this year.