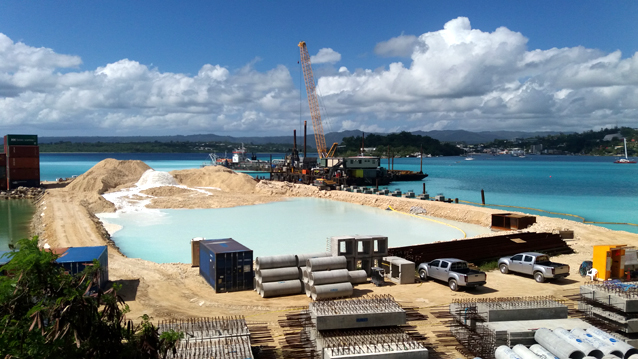 PORT VILA, 7th November, 2016: Plans are well underway to dredge the 50-metre-wide channel between the Southern end of Iririki shoal and the current site of the new South Paray wharf now under construction by New Zealand contractors, Hawkins Infrastructure Ltd.

Prime Minister Charlot Salwai Tabimasmas, will do the honour of switching the button on the dredger to commence the construction of the channel on Friday the 11th of November.

The Amity, the dredge barge, which arrived in Port Vila on the 18th of October, will take about 6 weeks to complete the dredging works, depending on the hardness of the materials to be dredged.

The cutter suction dredge is owned by Australian company, Halls Contracting Pty Ltd. In the past few months it has been stationed in Tuvalu, undertaking similar dredging works.

Once completed, a shipping channel of about 200 metres in length and 5 metres deep will allow vessels as large as Vanuatu Ferry to navigate from Pontoon Bay into Paray Bay to berth at the new domestic wharf, as well as at the government wharf.

Dredging will happen during the day for approximately 12 hours where the rotating cutter head will break coral and sand. The mixture of dredged materials and water will be sucked through a tube   and pumped through a pipe directly into the reclamation bund, which is the constructed ‘lagoon’ or pond visible to anyone flying over the harbour, or looking from above the road on the way to the main wharf.

Dredge materials will then be left to settle in the bund overnight; the bund fills up with sand and excess water is released back into the sea through a controlled weir gate. Fine sand that does not settle in the bund, but is suspended in the water flowing out into the sea, will eventually settle on the sea floor. It is anticipated that as a direct result of the dredging works, sediment plumes or white ‘milky’ water will be formed within the vicinity of the dredge works. Such plumes will be closely monitored, as well as contained by the use of silt curtains so that water does not become too murky, or exceeds a certain turbidity level.

Meanwhile, marine environments in and around the dredge site, particularly corals – approximately 600 heads in all, have all been relocated to their new home on the Western side of Iririki Island.

Mariners are asked to observe notices which will be issued by the Department of Ports and Harbour, as well as navigation aids placed around the work areas. In addition, divers are also advised that the noise underwater from the dredger will be quite audible and may be uncomfortable to those nearby.

A Community Liaison Committee has been established, consisting of representatives of various communities using or living around South Paray, as well as relevant government stakeholders. The CLC has been meeting monthly since the commencement of works at South Paray.

The CLC has been informed of the commencement of dredging in the area and its anticipated impacts and how they will be managed and mitigated.

The wharf is being funded by the Asian Development Bank, New Zealand Government and the Vanuatu Government at a total cost of USD 51.6 million, under Vanuatu Inter-Island Shipping Services Project (VISSP), and is part of a whole range of wharf infrastructures to be built and/or repaired in Santo, Ambae, Tanna, Pentecost and Malekula.