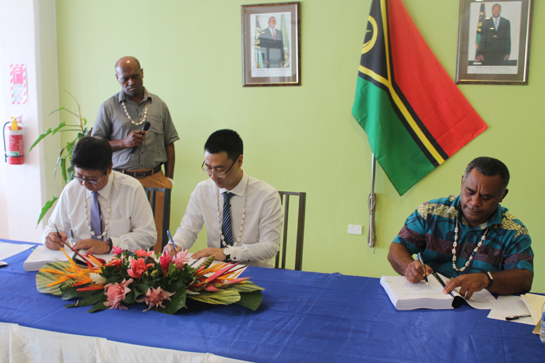 Minister for Infrastructure and Public Utilities Jotham Napat signed on behalf of the Vanuatu Government, while CCECC and Northwest Civil Airport Construction Group were represented by Business Manager Liang Qing.

Minister Napat expressed the Government’s full confidence in the contractors in successfully delivering all aspects of the rehabilitation works, under the World Bank-funded Vanuatu Aviation Investment Project (VAIP). The signing today marks the beginning of what is a critically important project for the people of Vanuatu. “Bauerfield is the gateway to Vanuatu,” said Minister Napat. “This is a project of critical importance to our nation, and especially our tourism industry, which contributes over 40 percent of our national GDP and over 30% of total employment.

The Vanuatu Tourism Office and broader tourism industry will be excited to see this project under way as it is one of the keys to unlocking Vanuatu’s tourism potential. It will also help secure the sustainability of our tourism industry into the future. “The Vanuatu Government stands ready to work with the contractors to complete this project within the 340 day timeframe so that Bauerfield can operate reliably and safely at least for the next two decades.”

Contractors are working with stakeholders including Air Vanuatu and Airports Vanuatu Limited (AVL) to identify ‘operational windows’ that will be used to carry out the works without interrupting normal airline services, ensuring that Bauerfield will continue to operate normally during the period of the project works. China Civil Engineering Construction Corporation (CCECC) and Northwest Civil Airport Construction Group have announced recruitment of key personnel, and the mobilization of equipment and machinery.

“We are committed to meeting the 340 day deadline which is why we will be deploying key personnel and machineries from China to Vanuatu after the signing today,” said Mr Liang. The contractors are expecting the first shipment of runway materials to arrive in early July, 2017, while machineries and equipment will be shipped from China to Vanuatu soon. The contractors are already talking with local companies in Port Vila to hire dump trucks, platform trailers, excavator and loaders to commence clearance of the storage site and preparing for the erection of the site camp. Meanwhile, negotiations are currently in progress for Lot 2 works, which include runway works at Whitegrass and Pekoa International airports.