An online follower lambasted the government recently as a ‘bunch of paper shufflers’ because of a perceived mishandling of one of the projects under the auspices of the Vanuatu Project Management Unit.

The comments obviously reflect how little knowledge people have of the processes and stages that a major multi-million-dollar infrastructure project like the newly completed Lapetasi International Multi-Purpose Wharf Development Project must go through to reach a successful conclusion.

At the risk of stating the obvious, when a project is hatched, that is only the beginning. A lot of the hard yards that actually get put into the negotiations, formulation, design and tendering, and then procurement often go unnoticed. Any of these stages could take months, even years before physical works can commence, which usually is the end result. And yet these stages represent some of the most critical parts of the life of any project.

First and foremost parties have to iron out all the details, agree to all the terms and conditions and then commit to achieving a desired set of outcomes. Get any of these different stages wrong and the whole project stands the risk of being seriously compromised halfway through.

In the end two loans were developed as a result of all the negotiations between Vanuatu and Japan. The signing of the first loan agreement was done on June 13th 2012 in Port Vila. The second was signed in July 29th 2015. The total sum of the two loans is just under Vt10 billion, with the Government of Japan happy to include a 10-year grace period for the loans and a repayment timeframe of 30 years.

Lapetasi was developed out of the need for Port Vila’s main port services to mitigate the high berth occupancy that was increasingly becoming a major issue at the existing wharf. To make matters worse, the existing infrastructure was being shared with priority cruise ships.

Lapetasi was also designed to provide a container storage unpacking space—enough to cater for the needs of a growing urban business environment. Furthermore, the new Lapetasi was to introduce an efficient and effective management and operation at the wharf so that cargo handling could be done in a much timelier manner, as businesses were often being slapped with the high cost of stevedoring services caused by delivery delays and congestion. 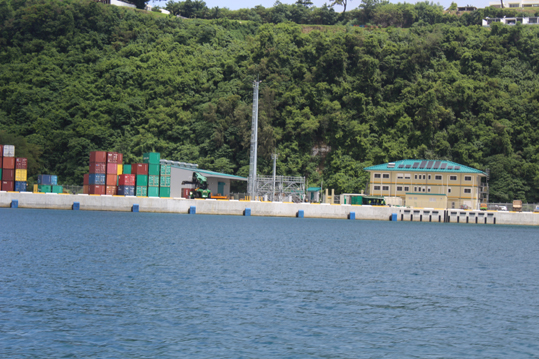 The contract was finally concluded in February 2015. Signing of the contract to build the infrastructure took place in May 2015. It took Toa Corporation, the next four months to mobilize personnel and equipment, hire staff and engage sub-contractors before physical construction commenced in October 2015. Toa set out to complete the project by October 2017. That is what they, and everyone involved in the construction of Lapetasi have achieved.

The overall scope of Lapetasi has been:

• To demolish and remove existing Lapetasi wharf and its piles,

The Vanuatu Government is pleased that all that the project set out to achieve have been delivered right on the dot. The new Lapetasi International Multi-Purpose Wharf is ready for a formal opening and handover Friday 23rd of February 2018. Organizers expect well over 300 guests and invitees to attend the ceremony.