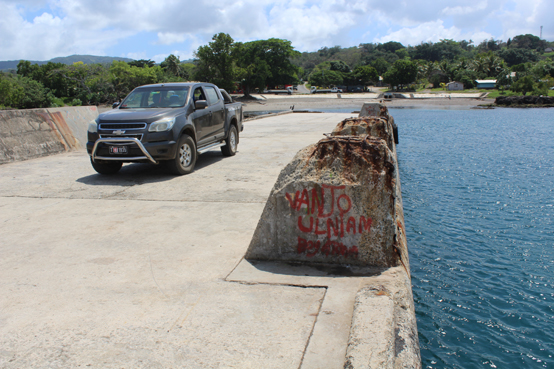 Vanuatu Project Management Unit (VPMU) is pleased to announce that Fletcher Organisation (Vanuatu) Ltd has successfully secured the contract for the repair of two of Vanuatu’s most important wharfs,  Lenakel on Tanna and Litzlitz on Malekula.

Fletcher Organisation (Vanuatu) Ltd won the contract through a competitive procurement process, at a bidding price of USD1.2 million, or approximately Vt130 million.

This announcement follows a no-objection-letter earlier this month from the Asian Development Bank (ADB) – as one of the key funders of the Vanuatu Inter-Island Shipping Support Project (VISSP), who together with VPMU and the Ministry of Public Utilities (MIPU) reviewed the bid evaluation report submitted by an independent panel.

The works will include wreck removals at Litzlitz wharf, and repairs to both of the existing infrastructures, with the current structures at the stage where they could be rendered unsafe if nothing was done. Both wharfs provide vital connections in terms of domestic trade, commerce and the movement of people from the outer islands to Port Vila and Luganville.

Fletcher will have 180 days to complete the repair works, or six months commencing from the date of contract effectiveness.

Lenakel and Litzlitz wharf repairs come under Vanuatu Inter-Island Shipping Support Project (VISSP), delivered by VPMU and funded by the New Zealand Government and Asian Development Bank (ADB). The key aim of VISSP is to strengthen inter-island connectivity through construction of new island wharf or jetties for at least seven islands including Tanna, Malekula, Santo and Efate.

Chairman of the VPMU Steering Committee, who is also Director-General of the Prime Minister’s Office, Gregoire Nimbtik expressed delight at the conclusion of the procurement process.

“VISSP has had its challenges, made worse by the current global pandemic. As such this is a highly significant milestone when you consider all the factors that played out over the last three years or so of what may have appeared to the general public to be lack of activity. In fact, a lot went in to get to this stage.

“I wish to congratulate everyone, most importantly our partners – the New Zealand Government and the Asian Development Bank for their commitment and trust in the Government of Vanuatu and the VPMU Steering Committee for this milestone. This is what we can achieve together and we look forward to more of the same, particular for projects that are still to come under VISSP,” he said.